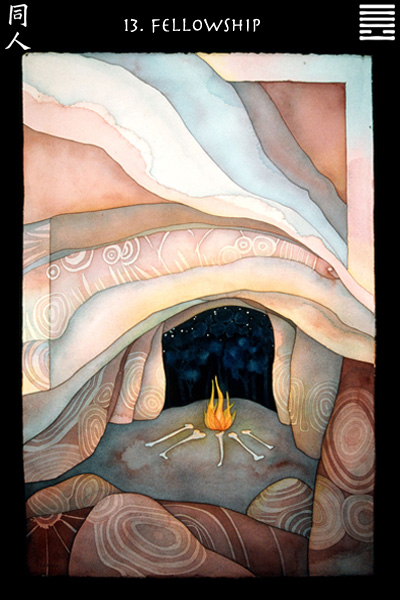 When communal or tribal bonds unite a group of people, great success is possible. But such bonding only develops as personal interests are subordinated to virtuous human relations, especially open communication and empathy. The broader the perspective, the greater is the good that can be achieved. The greater the potential good, the more powerful is the support behind it. A spirit of cooperation steadies the boat for the good of all, but it does help to have a beautiful island of high ideals to row toward!

Learn to respect the power of diversity, for a community’s strength lies not only in its numbers, but also in all the diverse skills and the collective resources of its members. Like the stoutest walls reinforced by different materials, the strongest groups benefit from a tolerance of differences, which strengthens the fabric of the whole.

With a unified group solidly behind you, even difficult enterprises can be undertaken without great risk.

When guests gather at the door, enthusiasm is high, and divergent agendas are not yet apparent. Such are the beginnings of fellowship. Use these moments carefully; they are opportunities not to be missed. To foster goodwill among a group at the beginning of an enterprise or consortium, avoid secret agreements. Goodwill is a fruit that blossoms in the light.

Fellowship within an exclusive group can bring regret or humiliation. If social contacts are elitist, snobbishness and unhealthy quarreling will result. This creates limitations for everyone. Avoid pettiness and shallow discrimination. Be open to others. Serious loss is unlikely, but hard feelings created by an attempt to gain a temporary advantage are almost always troublesome down the road.

Those who mistrust their allies, spying on them and planning surprise maneuvers, usually become trapped in their own nets. Avoid unnecessary plotting and scheming, for it is a sign of the disintegration of your community. When such a pattern has begun, put a stop to it immediately! Things will only get worse if you play games at a time like this.

Quarrels and misunderstandings among associates have a way of settling themselves, and this brings good fortune. Let a natural resolution form between you, because at this time fighting openly is not a good idea. The image is of the man who, after a small mistake, comes to see the error of his ways before it is too late. Sometimes, only by allowing for open disagreement can a group find its way. Along the way, each of us is allowed to make a few missteps in order to ultimately triumph in the end.

The strongest bond is the one between two human hearts that have come to know and share each other’s inner thoughts and desires. Though separated by circumstances or fate; though divided by differences of opinion; though angered by each other’s behavior -- if the bond is true, nothing can break it. This type of union can experience difficulty, but in the end it will bring the sweetest joy known to humankind.

There is fellowship with convenient associates, but warmth is lacking. The image is a group of people who live beside a lake; though they are cordial enough, no great purpose unites them. But that’s okay; civility may be the lowest form of community, but there is nothing wrong with it. This situation is not terribly satisfying, but neither is it a cause for regret.