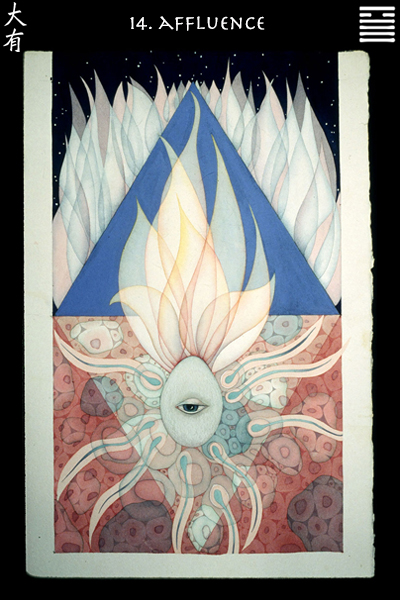 Supreme success! Like the proverbial pot of gold at the end of the rainbow, a person whose fortunes have turned for the better shines brightly now. At the core of true success lies unselfishness generosity and modesty. It is the tendency of a flexible or yielding nature to draw powerful forces to it, especially when prosperity begins to manifest. When this added power is wielded with grace and dignity, we have supreme success and great abundance!

Ah, but be careful. Along with any accumulation of wealth or influence can come an increase of pride and arrogance. Fight this tendency if you want your good fortune to continue. Stay attentive enough to manage your affairs well. And remember that while prosperity beats the alternative, it is only one element of a satisfying life. A lasting prosperity is one that honors the highest values and furthers the collective good.

In its first stage, success is innocent and blameless. It has not yet faced the challenges that accomplishment brings. Avoid creating future harm by guarding against self-indulgence; show consideration by exercising skillful restraint. Speak of personal or business matters only with trusted advisors; to all others, stay relaxed and detached. Leave your ego at the door—there is no space for arrogance. Acting thus will strengthen others’ perception of you as a person endowed with confidence as well as wealth.

The first lesson after an achievement of success is to stay fluid and mobile. The amount of wealth doesn’t matter as much as its usefulness going forward. Wealth of any kind has the most value when used to launch new undertakings for the good of all rather than to strengthen the elite status of a few, or just yourself. One way to spread wealth is to be generous, especially with those who have helped you. The reliable support of trustworthy people is the greatest asset of all.

Philanthropy is an obligation of those in possession of mature wealth. By donating a portion of wealth to support the greater good, wealthy people can avoid becoming possessed by their possessions. On the other side, those who lack resources need not feel shame in asking for or receiving assistance. All wealth is a passing trust, to be administered by people for a short time. A small-minded individual who is ignorant of and lacking this attitude will be controlled by what they own and the desire to accumulate more and more. Even though they have the potential power of abundance, they squander it or hoard it and, therefore, can never be joyful and free.

If pride and envy have surfaced in your life, let them go. Don’t try to compete with others’ projected self-images. Competing with another person’s ego gets you nowhere; it is a supreme waste of time and energy.
Consider the dilemma of average people who consort with the rich and powerful. When dining with the elite, the poorer person must sometimes pick up the check. Be willing to do so without hesitation or resentment, and you will remain free in spirit and be the equal of those around you.

The person who is able to win over others by sincerity and a sense of dignity always finds himself or herself in a favorable position. This applies as much to those of great wealth and stature as to anyone else. A combination of emotional honesty and personal dignity produces the best results. Those who can maintain such qualities, even while responding to improper behavior, have good fortune assured!

You are blessed by divine providence. This is a time for improvement in every way. Supreme success goes to those who are in the world but not of it—who, in the fullness of possession and at the height of their influence, remain modest and wink toward heaven. Providence helps those who live with faith and gratitude, and other people help the one who is true. To those who have these qualities, more will be given.