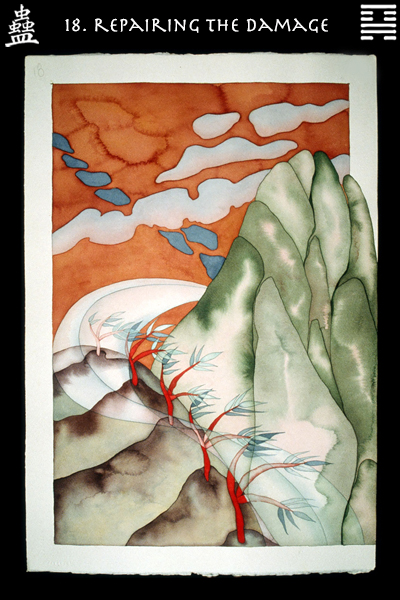 When something is rotting, it is time to repair the damage. In the world of human affairs, self-indulgence and corruption grow like weeds in an untended garden: they must be faced squarely and rooted out through bold action. Eliminating corruption—and the sloppiness that leads to it—is an ennobling human enterprise, as it clears the way for fresh, new beginnings. Such repair efforts ultimately lead to supreme success.

This is a time to be lean and efficient. The weeds must be rooted out before the whole garden is lost. Fighting decay, indifference, and corruption is not a simple matter; the steps must be evaluated carefully, and planning should precede action. Resist the temptation to strike out prematurely. Gather strength around you, and marshal your inner resources—arresting decay requires a strong effort. When you do act, pay close attention to the process. Make your strike as precise and clear as the path of the surgeon’s knife.

Excessive reliance on tradition may have produced some corruption, but in this case, it is not yet deeply rooted. Repair can be achieved without too much effort, even though some danger is present. Remain alert to the risks inherent in change and you will be able to avoid possible damage. Repair in itself is not a panacea, however. Restorative efforts must be watched carefully, particularly in the early stages, to see that the previous rot is not contaminating them as well.

In attempting to repair difficult situations that involve long-standing relationships, a certain lightness of spirit is called for. Among friends and intimates, a well-timed jest can be an effective lance. Righteous indignation, on the other hand, is more like a crude bomb—one that is liable to blow up in your face.

Everyone makes mistakes and most people want to correct them, but only the wise know when to stop trying. What’s done is done—you cannot unring the bell. Even so, it is better to be too energetic in trying to rectify past errors than to have no conscience at all. Just be mindful of when the effort surpasses the deed. Do not get trapped in the past.

Sloppiness is beginning to show itself, as you may be too weak right now to take much effective action. What is spoiling might decay further unless you begin to turn things around. It is time to gather your resources and prepare for remedial action.

You are able, with some help, to resolve problems resulting from neglect. You can’t do it all by yourself, but with the help of skillful supporters, you will be able to bring about a thorough reform to usher in a new beginning. Even though support for your efforts may not come easily, others will eventually praise you for it.

Important work takes place in the day-to-day world; however, there are high priorities closer to home too. Stopping to let the world go by as you cultivate your personal growth is of great value—not only to you but, ultimately, to others as well. Just remember that, when withdrawing from events, it is essential to avoid falling into the trap of sitting idly by and criticizing the actions of others. Now is the time to focus on what you can do to evolve.