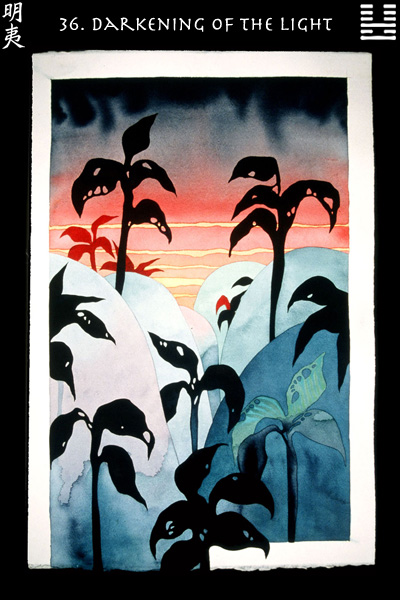 When the light goes down, it may be wise to become invisible. The image is of fresh darkness, the period just after sunset or after a fire has gone out. There is still much activity left over from the light of day, and movements in the outer world are at their most dangerous. Even the smallest sound, the faintest glow of light, can attract unwanted attention now.

When the darkness of stupidity reigns in human affairs, it is best to keep your brilliance “hidden under a bushel basket.” Let your thoughts and efforts be quiet, self-contained, and protected, as much as possible, from harmful influences.

Don’t let yourself be swept along on the current of conventional wisdom when too many dangerous uncertainties exist. Try not to become too depressed or anxious; this period too shall pass. Just endure it for now and inwardly preserve your self-confidence, while outwardly remaining cooperative and flexible. The time to assert yourself will come. Avoid looking too far ahead if you have not yet achieved your goals — that will only stimulate feelings of regret or longing, which can eat away at inner strength.

So, be cautious and reserved. Control yourself. Do not needlessly stimulate forces of opposition. During dark, unsettled periods, it is best to step gingerly around sleeping dogs.

When lost in a cave, one small candle is better than the light of a thousand dreams.
Attempts to soar above obstacles by ignoring them are futile. When obstacles are real, one should not indulge flights of fancy about imagined success. To indulge in fantasies will result in a loss of respect, because attempting to solve large problems is a sign of weakness, unless there is an objective chance at success.

Doing your duty during a crisis brings good fortune. The image is that of someone who is injured in a disaster, but works effortlessly to save others who were wounded in the same event. In times of calamity, rescue efforts bring lasting benefits to both the saved and the heroic. Such an effort surely brings good fortune.

Victory over dark forces is achieved, as if by accident. But don’t be too hasty in righting past wrongs. Some wounds can only heal themselves and take time. However, if a sudden opportunity arises to cage a raging beast, close the gate and lock it.

There is impending danger in the night: the image is that of a person who has grown close to a source of negative energy. Once you have perceived a negative influence, it is of no use to pretend that it does not exist. Only by accepting the truth of your intuitive perception can you find shelter before evil is unleashed like a dark storm.
When near a source of dark energy, persevering on the wrong road brings misfortune. Move away from it.

When confronting a dark force, small deceptions could be helpful, as long as your innermost convictions are not compromised. Even though you may be forced to take extraordinary measures -- actions you would never consider in normal circumstances -- stick to your inner principles. However much you may deceive those with evil intentions, be careful not to deceive yourself.

The climax of the dark times has arrived, and the darkness has begun to consume even itself. When negative energy is finally spent, people of intelligence and good spirit naturally re-emerge, and gain rightful positions of prominence.