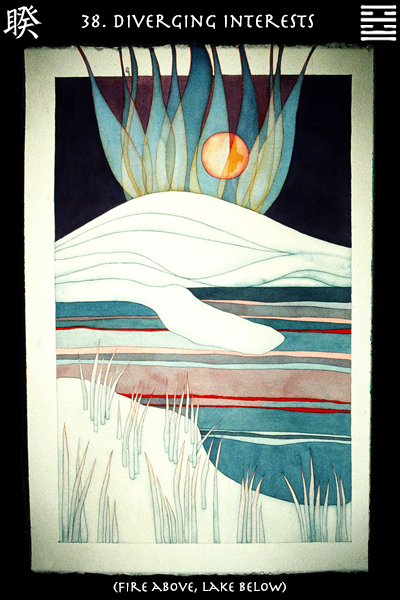 Some level of estrangement is indicated. For example, when brothers and sisters choose partners and marry, they often grow apart, since their allegiances prioritize new families. Though they will remain close enough to deal with problems and interests related to their original family, they are less likely to undertake great projects together. Simply put, when people grow apart—even for the most natural of reasons—their points of view, values, interests and schedules diverge.

Different natures and interests bring opposition into the world of human affairs. If opposition drifts into alienation and enmity, good results are few (if at all). But when opposition takes the form of healthy competition, or when it is recognized as part of the natural order of things, good fortune is still possible for the relationship.

When diverging interests make a situation seem stagnant or futile, remember that there are always creative possibilities inherent in polarities. One is reminded of the interplay of the opposites, yin and yang, which is fundamental to life itself. As the symbol of the Tao illustrates, the yin and the yang each have the seed of the other residing within them.

If opposition has its roots in issues of principle, you must hold on to your integrity and individuality. Let go of vulgar or self-absorbed people who do not share your values. With both people and companies, one measure of stature is the quality of one’s competition.

Trying to rectify estrangements caused by small misunderstandings can lead to situations similar to that of a person whose horse has escaped the barn. Dashing after the horse in a futile effort to capture it makes the horse run faster and farther away. But if the person simply returns home, the matter is settled quite easily, for the horse will return to the barn once it becomes hungry or thirsty.
Let go by letting small disputes resolve themselves; and let the other person come back around of his or her own accord. Application of too much power in petty disputes can drive you further from your goal, and make reconciliation more difficult.
Caution is justified against negative people who may have forced themselves upon you, perhaps through some misunderstanding. In this case, to actively intervene will probably cause hostility and more problems. The better course for now is to endure the circumstances until they eventually dissolve and the disgruntled move on of their own accord.

This is a difficult time to get together with those in your circle with whom you have misunderstandings. However, if you do get the chance to meet “accidentally,” there may be an opportunity for compromise—provided there remains an inner affinity between you. This can only happen if you let go of mistrust and let yourself be open to the other’s truth.

This is the line of Murphy’s law: everything that could go wrong has gone wrong. It may seem at times that the universe is conspiring against you, but when opposition to progress is at its peak, an opening soon emerges. When bad luck strikes, the best strategy may be to join up with someone whose luck is better than yours right now. With the right attitude and persistence, good fortune returns in the end.

If you find yourself in a group of people with whom you have little in common, seeds of opposition can turn into personal isolation. In such circumstances, the ideal solution is to find someone with whom you share deep interests and unwavering trust. Through the taking of a good friend or partner, inner opposition can be overcome.

When someone with sincere intentions at first appears to oppose you, look deeper. It may be that you have misjudged this person, or that you have somehow been mistaken in your own attitudes or behavior. In this world, sincere people should be met openly—wouldn’t you wish the same for yourself?

Estrangement can arise from a failure to clearly perceive the world. Overly defensive people often ascribe all sorts of sinister motives to other people, even to those who would be their friends. This kind of thinking leads to isolation. Fortunately, all that is necessary to reverse this kind of cycle is to observe the world more closely, without prejudice, and to be honest about possible errors in your attitude. This will also lead to an increase in self-esteem, which may strike at the very root of the problem.
Those who think well of others tend to think well of themselves.