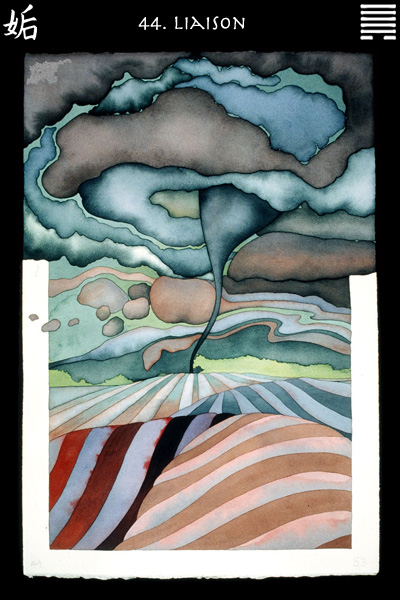 An attraction is strong, but the relationship may not be destined to last long. A coming together of disparate forces may not be what it seems. An apparently harmless — but potentially dangerous — element has attracted attention and is pulling on a stronger one. One image is of a bold but immature young girl who uses her charms to gain influence with a powerful man. The man dallies with her, thinking that it can do him no harm. Ha, famous last thoughts! When power shifts into the hands of those who are not prepared for it, harm can come to all parties. Still, you need not fear meetings with those whose positions are different from your own, as long as you are free of ulterior motives.

Be wary of temptations that arise because of the power of your position or, conversely, your connection to someone in an important position. Generally, it is best to combat temptations to take advantage of power differentials by nipping them in the bud before they can flower. As soon as you become aware of a dangerous liaison, it usually behooves you to promptly speak up. Also know that there are times when a rendezvous of the yielding and the strong turns out to be a great opportunity for a positive and constructive relationship. The difference between careless connection and a relationship of depth lies in the motives of one’s heart. How sincere are you?

As soon as it becomes clear that an inferior element has crashed the party, show that distraction to the door. In social situations, one careless person can disrupt the lives of many good people; and such a party-crasher may also have many derelict relations. The intrusion of inferior forces referred to here may also refer to a small, unhealthy craving which, if not checked in time, can become a destructive obsession.

Here, an inferior force is held at bay through gentle means. There will be good fortune -- if you can hold firm. One image is that of a viral epidemic which is contained through quarantine rather than through a massive program of vaccinations and other aggressive measures.

There is danger of being influenced by a weakness within yourself, but circumstances are temporarily preventing it. As much as you might like to indulge a certain petty desire, don’t do it -- at least not now. Indecision, in such a situation, can be helpful, if it leads to insight and proper action in the longer run.

It is not wise to turn your back on subordinates or more humble people; you may need their support sometime in the future. When people of small influence have good intentions, it is best to keep them on your side, especially in case their support should ever be needed. Seemingly unimportant people have a way of becoming significant eventually. Beware of your own ego.

Stronger personalities can often find a way of exerting control over weaker ones without even seeming to act. But you do not need to bring attention to your attributes. Simply allow events to take their natural course. This is skillful leadership, and a sign of true power.

Those who have been sitting quietly on the mountaintop can find the tumult of the city almost unbearable. The mere suggestion of reentering the active arena can be repulsive after a period of peaceful withdrawal. Nevertheless, proceeding to hold yourself aloof from normal concerns or activities can expose you to criticism and reproach. If you feel a need to stay removed, don’t let it bother you. When your work is done, your time is your own. Take quiet time if you need it. You can ignore the expectations of others when charting your course.