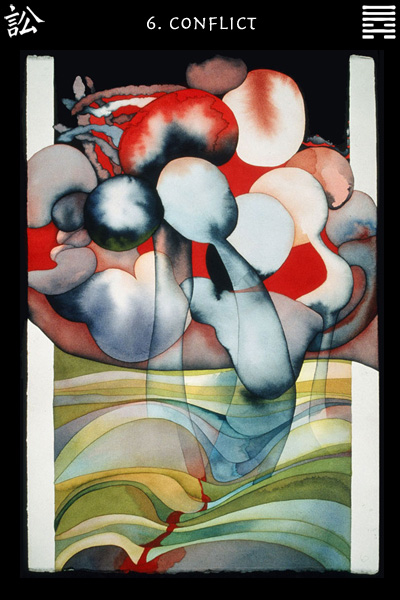 Conflict often arises when a person who is convinced that he or she is entitled to something meets with opposition. In such cases, the wise choice is not to push things to the bitter end, because knocking heads perpetuates ill will. Creative solutions that meet others halfway are more valuable and longer lasting than victories achieved through force.

Conflicts in which one party is not sincere inevitably lead to subterfuge and distortions. In such situations, those of strong character keep a clear head, protect their integrity, and look out for their own interests, even while seeking compromise. It can help to find a fair-minded mediator who can settle these matters.

In times of conflict and turmoil, new ventures and new initiatives should be avoided. Instead, examine the sincerity of your current beliefs and the beliefs of those around you. Seek advice or arbitration from an impartial and mature person. Consider everything carefully before making any major decisions; consider the option of compromise. Clarify the roles and responsibilities of those with whom you live and work to reduce conflict in the future.

Disputes and a dangerously charged atmosphere seem likely, but the storm will blow over if you remain careful. Do not force things; avoid fighting. There still may be a simple solution at hand since it is possible that a minor misunderstanding is at the root of the present conflict. If you face an adversary who is much stronger than you, drop the dispute quickly. If you are engaging an equal, seek allies.

When challenging a superior force, retreat is a good tactic, not a disgrace. In the face of insurmountable obstacles, misplaced valor—perhaps fueled by a sense of personal pride—is not only a mistake, it’s also dangerous to those around you: your allies, your friends and your community. If an adversary with a loaded rifle has you in their sights, it furthers you to duck.

People with big personalities can generate conflict by attempting to acquire more—more credit for accomplishments, more material possessions—than is really their due. Don’t let yourself be like this! Learn to live within your means and to value most dearly those things that cannot be taken away. You can avoid much conflict by working solely to produce good results and to receive fair compensation for your efforts. Let the prestige and flashy objects go to others.

Winning isn’t everything. In situations where you face a weaker opponent, winning is not even always the strategic thing, particularly if you are not totally sure of the objectivity of your position. Remember that all conflict, no matter how much the odds may favor you, carries a price whether you win or not. Learn to demonstrate goodwill when you hold the upper hand, and you will find that in the long run, your position will be strengthened.

In disputes where you know you are in the right, look for a just mediator who can bring influence to bear on the other side. This person must be strong and above reproach, so that he or she has both moral authority and personal clout. In such situations, it behooves you to just let go and let this arbiter take over. If you have satisfied your own conscience that your cause is just, chances are that you will convince others of good conscience as well. And remember, not every field is a battleground; many conflicts resolve themselves.

Conflict may have gone too far. When success over others is achieved through sheer force of authority or superior position, the victory will not last. Those who can win only by the sword are condemned to carry shields with them everywhere. Beware of hollow victories.