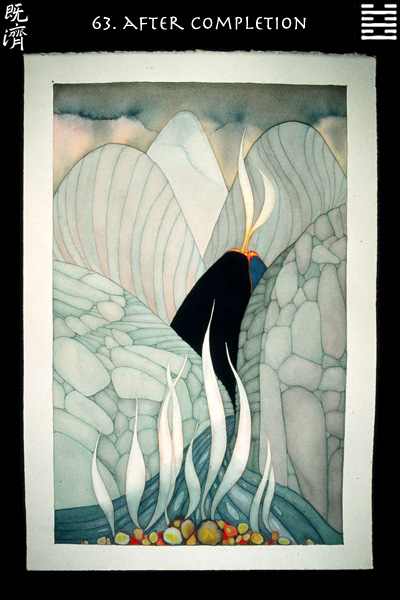 It is a fine irony that after the completion of a project or grand enterprise, there is still much to do. Completion is merely a pause in the cycle of creation and decay—a momentary still point for the swinging pendulum of life. Though completion implies a period of restful pause—one that has been well earned—it is not an actual ending; it is a harmonious flat spot in the constancy of change and movement, like the still point between the inhalation and exhalation of one’s breath.

One image of the After Completion Hexagram is that of a kettle of water boiling over a fire. When the forces are balanced, the water boils properly; when the pot is too full and boils over, it puts out the fire. On the other hand, if the fire is too hot for too long, it can evaporate all the water. In maintaining the equilibrium that follows the completion of an arduous task, forces at work in the situation must be monitored carefully to ensure that a proper balance is maintained. This is a time for fine tuning—a time for refinements and embellishments of what has been accomplished.

Even as we enjoy a rewarding situation, the laws of the natural world dictate that influence and success must eventually decline. Don’t let your current good fortune give rise to adopting an attitude that is too careless or relaxed. Whatever is successful or already established needs to be carefully maintained, without trying to expand it right now. What is incomplete, on the other hand, should be brought to fruition without delay. Then take satisfaction upon completion and enjoy a sense of fulfillment, but do not linger too long on endings.

In the period following the completion of a major undertaking, the momentum of previous effort still exists; and there is a tendency to continue onward. But be careful; for once a project has reached its proper end point, continuation for its own sake can bring misfortune. Pressing ahead after completion can threaten to bring collapse to established success. Even so, no real harm results if your approach and demeanor have been correct.

If a kind of stagnation has seeped into the current situation because of past success, your talents may be hidden by these circumstances or by the efforts of those in positions of power. When this happens, it is important to avoid attracting attention to yourself through immodest behavior. Just be patient. That which is rightfully yours cannot be denied in the end.

After the completion of a project or enterprise, be wary of the urge to keep expanding. Allow victories some time to settle in, and approach new steps with the same determination and attention to detail that sustained past efforts. If success has brought new responsibility into your life, try to delegate it properly by choosing people of talent and ability to work with you. This will not be an easy task, so gather your energies mindfully.

Even during times of harmony and prosperity, certain imperfections may still show themselves. While it is important not to overreact, the prudent will take decisive action to eliminate little problems before they are allowed to become big ones.

In spiritual and religious matters, prosperity can breed pomp and ostentation. It is vital to remember that wealth is not a signal of divine favor. What is lacking in such a display is piety and respect for the Tao, the Way of fluctuating yin and yang. Humankind sees what is manifested in the material world, but spirit notices what is held in the heart. In times of prosperity, retain humility and preserve goodness of heart. Ornate religious displays devoid of true spirit are like gaudy, empty carriages rattling in the wind. Whether rich or poor, nothing is more important than sincerity, modesty, and honesty in whatever is offered.

When one has scaled a dangerous cliff, there is a natural tendency to look back and revel in the drama of having overcome it. But lingering may present a greater danger: what has been safely in the background (or in the past) may be gaining on you. Don’t look back. Whatever you have transcended is best left behind for now.
Focus on forward movement. Don’t hesitate or allow yourself to be complacent or self-congratulatory. If you take the time to pause, greater risks could quickly mount up. This is a moment of opportunity but one in which seemingly stable circumstances conceal negative influences. At present, a failure to move forward might cause you to fall back, perhaps into hazardous circumstances. To bask in admiration for yourself and how well you have done to achieve this position will only invite back the old challenges. Move on!